The Street and address system in Cape Coral 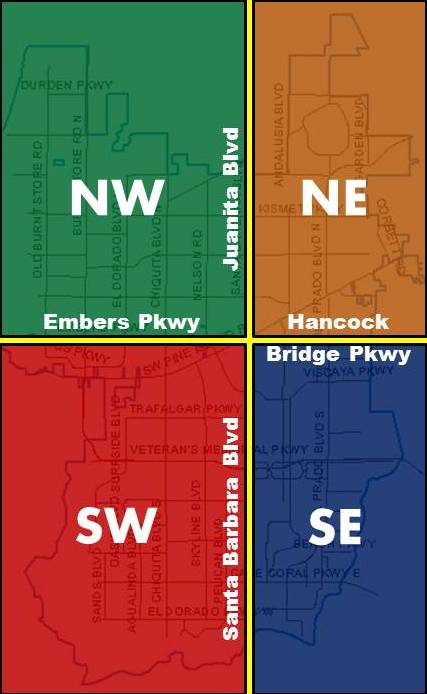 Finding your way around the city of Cape Coral can be difficult if you don't know how the city is laid out. But once it is understood, getting lost will be a thing of the past. Cape Coral is divided into four quadrants: SE, SW, NE and NW. The majority of street addresses are identified with these prefixes.

SOUTHWARD: Starting at the center of the city and moving southward in the SW and SE quadrants, the street numbers begin at one and continue until 59th Ter or to the river.

NORTHWARD: Moving to the NW and NE quadrants of the city the numbering system also starts with one and continues northward to 48th Ter or to the city limits. East / West roads are called Parkways, Streets, Terraces or Lanes.

WESTWARD: Starting at the center of the city moving westward in the NW and SW quadrants the street numbers begin at one and continue until 47th Ave or to Matlacha Pass.

EASTWARD: Moving to the NE and SE quadrants of the city the numbering system also starts with one and continues eastward to 26th Place or the Caloosahatchee River. South / North roads are called Boulevards, Courts, Places and Avenues.

House numbers coincide with the bisecting street number. The first number of an address indicates the intersecting road it is closest to and the second indicates the house number in that block. Even numbers are assigned to the South and West sides of roads, odd numbers are assigned to North and East sides. Streets without numbers like Dolphin and Bayview are typically located in the downtown or Yacht Club area.

Cape Coral has over 400 miles of canals, 27 miles of shoreline and is 114 square miles large. Think of the road layout system as a large grid, with an occasional canal that gets in the way. Therefore it is always good to carry a Cape Coral map and check out the location before leaving.

Stop by our office to say hi and pick up your free copy!