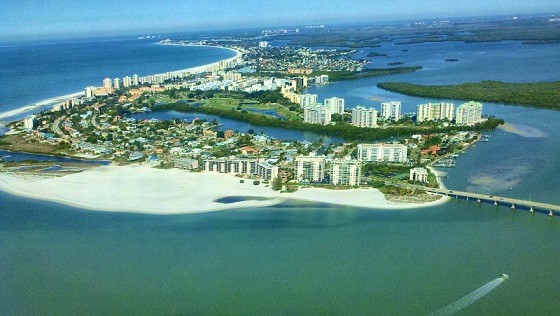 Bonita Springs dates back to around 1870, when government surveyors set up their tents in a remote part of southwest Florida near a spa the native Indians believed could cure them. After the crew left, the area became known as "Survey" and the river "Surveyor's Creek". Few people came to live here during the next decade, but by the late 1880s, when Braxton B. Comer bought just over 23 square miles of land around Survey and sent 50 African-American families from Alabama with donkeys and equipment, helping the population double. Large plantations with pineapple, banana and coconut emerged. Within a few years Survey developed from a small village with few inhabitants to a settlement. In 1887 the first public school was built of logs. In 1910 the 2-story "Eagle Hotel" was built, which served as a restaurant for visiting hunters and fishermen.

In 1912, the Tennessee-based investor J.H. Ragsdale purchased more than 9 square miles surrounding Survey. He and his business partner, Dan Farnsworth, had the area surveyed and planned a small town with streets and avenues to attract potential buyers of land. There was no church, but in 1915 a pastor held the first communal service in the schoolhouse. The group that wanted to open the country decided that the name Survey was not suitable for advertising. Then the city was renamed Bonita Springs and the Surveyor's Creek became the Imperial River.

In the early 20s, Barron Collier, in the urge to expand his empire, expanded the Fort Myers Southern train line around Bonita Springs, bringing another boost to the area. Another place lost its name when the well-known Fiddlerville, named after the multitude of small Fiddler crabs, became Bonita Beach. 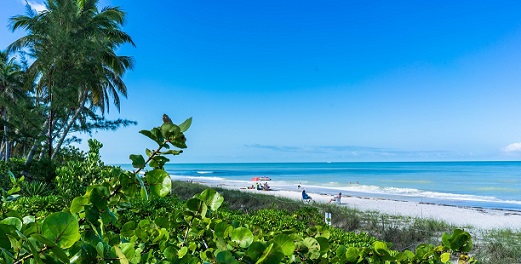 New attractions helped Bonita Springs to attract more visitors. In the Everglades Wonder Garden, the Piper Brothers showed panthers, bears and other native animals and shipped rare species to the Chicago Zoo. One Canadian, Harold Crant, saw the millions of shells that lay knee deep and wonderfully colorful along the beach and opened the "Shell Factory". The factory burned down in the early 40s and was later rebuilt in North Fort Myers.

The years passed and the U.S.41 and I-75 corridors opened up more access, creating shopping malls, modern office buildings and outstanding golf courses. Today Bonita Springs is an attractive area with beautiful beaches, first class restaurants and excellent hotels to relax. Thus, the area has become a thriving city in the southwest. It is hard to understand that just over three generations ago, the root of this expanding city was a collection of locals living in small huts in the middle of nowhere - a place called "Survey". 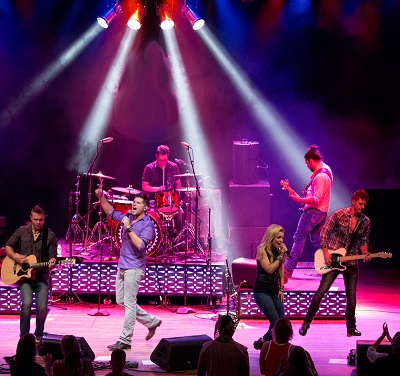 In Bonita Springs you can find many wealthy people owning luxury villas right on the beach. Sunsets at Bonita Beach are a highlight and evening walks an experience.

For those looking for a natural beach, Barefoot Beach State Preserve is one of the best in the United States. The 1.3 square mile natural land is one of the last offshore islands on southwest Florida's coast that will not be developed.

Furthermore, there is the Bonita Beach Park - the 270,000 square ft beach park with 8 picnic stations can be reached via a boardwalk, which leads through the dunes and coastal vegetation.

Also, the Little Hickory Island Beach Park is worth seeing. In addition, there are 10 more public beach access points along Bonita Beach with adequate parking. You can also look at the complete overview.

On the way from Fort Myers Beach you pass the idyllic Lovers Key State Park. Here you are taken from the parking lot with a small trolley to the beach a little further away: you can get off at two different stations. The approximately 1,600-acre park consists of 4 small islands and offers a variety of hiking and biking trails, a pier for kayaks and canoes and miles of pristine mangrove forests and beaches. The park provides habitat for all kinds of animals, such as West Indian manatees, bottlenose dolphins, Roseate Spoonbills, marsh rabbits and bald eagles. Here you can see more Parks.

For the shopping enthusiasts there is a beautiful open-air shopping mall called The Promenade at Bonita Bay. There you will find shops, restaurants and bars that offer something for every taste - right on the water, as the mall is crisscrossed with canals. Unfortunately, more and more shops are closed and have to give way to the influence of the big malls in the area.

What is not negatively impacted are golf courses. Since they are very popular there are more than 25 of them in Bonita Springs, some of which are beautifully situated.