The Beginning of the Islands

Around 3,000 B.C. the sand of the existing area of ​​Captiva began to erode, eventually leading to the formation of Sanibel Island. The waters in the Gulf of Mexico were 8 feet lower than today. It is said that the first inhabitants of Captiva were the Calusa Indians and the population is said to have reached a figure of 50,000 people. "Calusa" means "wild people", and that is also how they behaved. The tribe was resistant to colonization and attacked all the discoverers who came to its territory. By the end of the 18th century, most Calusa had died out. Many were captured and sold as slaves, while others died from diseases such as smallpox and measles.

An Austrian named Binder was on a German freighter heading for New Orleans when the ship capsized and he was washed ashore on Boca Grande. He retreated to the countryside, built a raft and went to Pine Island, where he found help. In 1888 and at the age of 38, he was naturalized due to his battles with the US Army and was allowed to live on Captiva. For 10 years he was Captiva's first and only resident. 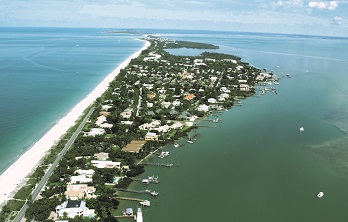 Captiva, originally part of neighboring Sanibel Island to the southeast, was severed by the 1926 Miami Hurricane, when the storm surge created a new channel, the "Blind Pass".

North Captiva Island or Upper Captiva is another island that was separated from Captiva in a hurricane in 1921 and created the Redfish Pass. North Captiva is privately owned and is halfway developed with about 300 houses and 300 empty lots. The island can only be reached by boat or a small plane. Captiva was heavily damaged in August 2004 when the eastern wall of Hurricane Charley hit Captiva. 160 buildings were destroyed and another 150 heavily damaged. The storm surge left a 1,200 foot wide path across the narrowest part of North Captiva, which now separates the islands. 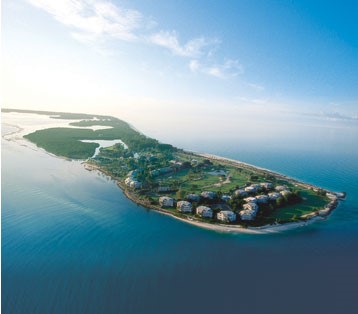 Today's Sanibel and Captiva are islands with their own charm. They are connected to the mainland by a 3 mile long crossing made up of islands and bridges, the Sanibel Causeway. This was built in 1963 with a drawbridge, until then you had to use a ferry to cross the water. The new Causeway was completed in 2007 and now gives even large sailing boats the opportunity to pass the 65 foot high bridge. The Iceland Park along the Causeway is a nice place for barbecues, windsurfing or just for a relaxing stop on the water. The old bridge was demolished and sunk in the Gulf of Mexico, where it created an artificial reef for divers.

The palm-tree and flower-covered islands are world-famous for their great beaches and the variety of shells that are washed ashore (it is said that the shellfish population is the highest in the U.S.A.). There is still untouched nature, which is otherwise only found in a few places. The sunsets on the beach are world famous and convey a Caribbean-style relaxed atmosphere.

Sanibel and Captiva have a network of well-developed bicycle paths but you can also use a trolley bus. 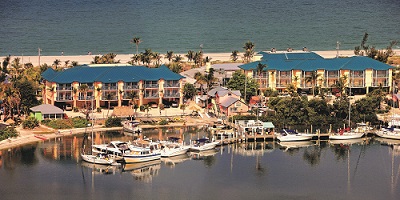 The irresistible mix of sandy beaches, exotic animals, lush vegetation and glorious sunsets make a visit to Sanibel and Captiva Island an unforgettable experience. In order to keep it that way, the residents exercise a lot of care in the further development of the island. Only about 7,000 people live in the two cities - this is partly due to the fact that not everyone can afford this location. Here, the beautiful mansions start at 7 digits and are mostly owned only by wealthy Americans or Canadians. Also, some celebrities can be found in the land register of the islands. Mass tourism is kept subdued by rental restrictions and high bridge tolls.

From the time of grapefruit and coconut farms, the islands have maintained their idyllic charm to this day. The modern influences are largely kept away. In order to maintain the island character, traffic lights and street lamps are even left out.

More than 20 miles of cycling and hiking trails offer the active vacationer a lot of variety. For the animal lover, many biotopes accommodate dolphins, manatees, otters, turtles, eagles and many other species. One of the best-known attractions on Sanibel Island is the Lighthouse. By far this is one of the most popular destinations on the island. The nearly 90 foot high structure, which was built to guide ships, was completed in 1884 and sent its first light signals on August 20. It is located in a nature reserve directly on the beach. Unfortunately, the Lighthouse cannot be visited because it only has an iron skeleton and there is no viewing platform. For great pictures, especially at sunset, it offers a beautiful motif. 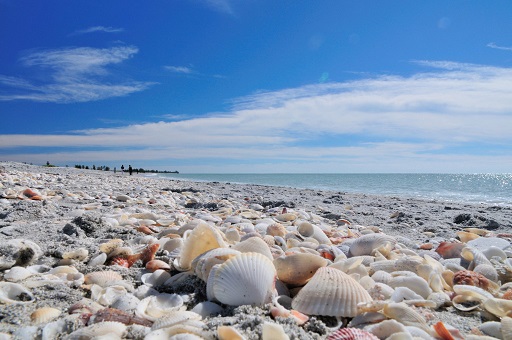 The natural and peaceful Lighthouse Beach is located on the eastern tip of the island, where you can often see starfish, pelicans, dolphins and manatees in their habitat. Water sports enthusiasts can enjoy canoe and boat tours and have optimal conditions for Kite-Surfing. For beach lovers, there are of course other notable destinations:

Located on Sanibel Island, Bowman's Beach is the most popular stretch of beach, known worldwide for its abundance of shellfish. It is said that up to 300 different types of shells appear here, which makes it a true paradise for the shell hunter. Near the beach there are picnic areas and barbecue grills. The Bowman's Beach is secluded and the grassy dunes give the impression of a unique and natural setting. 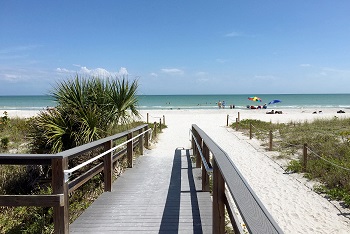 Turner Beach is very popular for a sunset visit. It is located on the southwestern tip of Sanibel and Captiva Island. The beach was separated by Hurricane Charley in 2004. The fantastic view of the Gulf of Mexico is unique. Here, too, the shell seekers frolic. If you walk along the beach you will pass the luxury villas of the locals and see impressive story-book like surroundings.

Also a beautiful natural beach is Captiva Beach. This invites to the end of the island of Captiva for a restful and peaceful day in the sun. Few visitors drive the relatively long way to the north end of the island. If you do, you will be surprised by quiet spots where you can enjoy the turquoise waters and the white sand beaches.

The way leads through the most beautiful street, Captiva Drive. Counting the number of breathtaking villas on the beach (many of which are not visible from the street due to the long driveways), leads you to the conclusion that you have just passed several hundred million dollars of real estate value by the end of this idyllic mile. 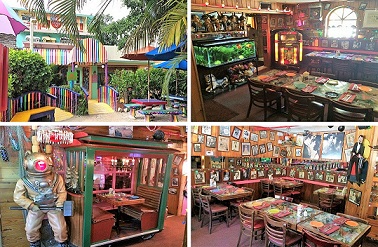 If you've made it all the way to the north of Captiva, you should definitely stop at the most spectacular restaurant, the Bubble Room. Even from the outside it looks colorful and crazy. If you go in then you will not believe your eyes. Rooms filled with toys and other objects dating back to the 1920s will be found in the building that has been standing here since 1979. No wall is not decorated, no corner not decorated with pictures or other items. A train passes through one of the dining rooms and the waiters are always happy to entertain the guests. Toy shop or restaurant? If there was no food, the former would be more appropriate. The knick-knacks are everywhere in the Bubble Room and a real experience. The menu starts with burgers and goes from good steaks to a sweet ending with cake, which is already a meal by itself due to the size of the pieces. There is also a nice and cozy bar in the Bubble Room, where the early cocktail tastes twice as good in the midst of old souvenirs.

Sanibel also has a lot to offer to nature lovers. The J.N. "Ding" Darling National Wildlife Refuge is a Florida National Park. The approximately 5,000 acre area represents approximately one-third of the land mass of Sanibel Island. A portion is not accessible to the public in order to protect the untouched nature. 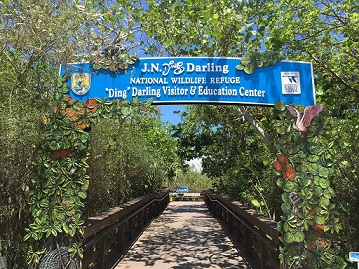 The mangrove and marsh area was registered as a National Wildlife Refuge in 1945 and received its name in 1967 in honor of the well-known cartoonist Jay Norwood "Ding" Darling. In 1976, it was finally declared a nature preserve to protect the increasingly endangered mangroves. The park is particularly known for the approximately 250 species of birds that are native to it. When Hurricane Charley caused massive damage on the island in 2004, fundamental changes in the ecosystem and topography emerged. The area can be crossed by car, but it is also recommended to plan a hike. Numerous waterways can also be used by canoe, as the bays and mangrove forests have a signposted path. Every year, around 5.5 million visitors come to admire this protected nature park.

If you are a looking for a little shopping on the island, you can have fun in the Village Shops. The small open-air shopping mall is beautifully designed and invites a shopping spree. Next door is the Periwinkle Place, which offers even more choices for shopping.